By Reachmaster Admin in News
9 years ago
0 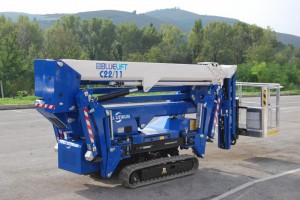 Although lithium-powered compact lifts are not new, the ability to combine lithium batteries and a combustion engine on the same unit is ground breaking, according to Ebbe Christensen, president of ReachMaster Inc. “We’ve been involved in pioneering lithium solutions before, and the challenge has always remained to make a system that is compact enough to fit even the smallest units and still leave space for an outdoor combustion engine and thereby making it a true hybrid,” he said.

ReachMaster is introducing track-mounted compact aerial platforms that offer lithium hybrid power for all Bluelift models ranging from 39- to 72-ft. work heights. The lithium system can be easily transferred from one unit to another and offers an energy-saving system that modulates the RPM of the electric motor, saving up to 20% battery power. The lifts also have a management system that automatically selects between lithium and combustion engine, said Christensen. The new lithium solutions from Bluelift are available both as lithium-only units, as well as hybrid units, where the lift can draw power from either the battery system or the combustion engine.

According to Christensen, the main problem for all the compact track-based lifts, no matter brands, has been the fact that their electric motor was designed for 220V direct supply, and when converted to run on 110V, the result was significantly slower speed, as well as frequently exceeding the power supply in U.S. buildings. This would result in circuit breakers frequently popping and disrupting the work as not all buildings offers 220V.

“Add to that,” he said, “both the inconvenience and the danger of having an extension cord permanently attached to the unit while you drive it inside a building, and it is easy to see why battery power is by far the desirable solution.”

Standard battery solutions have been available on larger compact lifts for decades, but the lack of physical space on the small units has remained an obstacle, Christensen explained. “Taking the lithium battery technology to new limits means thinking outside the box, and that’s exactly what Bluelift has done. The new system is smaller than anything else we’ve seen, yet offering more power, and the ability to transfer it from unit to unit makes it possible for fleet owners to share one system between several machines,” he said. “The new patent-pending power management system is also going to help customers get the maximum out of the units.”

When operating in conditions where the combustion engine can be used, the system will automatically determine which power source is the most efficient and draw power from either the batteries or start the engine, which according to ReachMaster saves battery life and the environment.

“When you add these new features to all the standard features like auto-setting of outriggers, automatic start-and-stop functions, basket rotation, 110V and air/water to the basket, and single door access for most units to name a few, we believe Bluelift has raised the bar again without jeopardizing its position as the most affordable product line in its category” Christensen said.

This site uses Akismet to reduce spam. Learn how your comment data is processed.